"There are decades where nothing happens; and there are weeks where decades happen"--Vladimir Ilyich Lenin

It should be obvious: official reserves are not 'safe assets' held in 'riskless' peer central bank custody if they can be seized and/or expropriated by a geo-strategic rival at the stroke of a pen. Market assets get re-rated whenever the return of your money (risk of default, seizure and/or expropriation) becomes more important than the return on your money (interest or dividends). We are facing a great re-rating of Western currencies, credit, and marketable assets in the wake of Western sanctions against Russia with unknowable implications for financial stability. 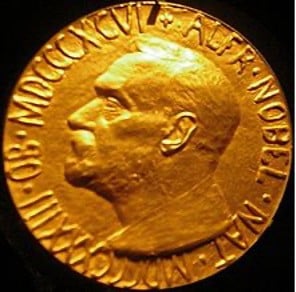 The West may not realise it yet, but the economic sanctions and embargoes following the Russian 'special military operation' in Ukraine may hurt more at home than in Russia. This is the Angell Paradox.

Sir Norman Angell won the 1933 Nobel Peace Prize for his insight in The Great Illusion (first published 1910) that whoever wins a war between two developed, interconnected nations, profit from war is impossible. If the victor expropriates from the vanquished they undermine the legal certainty and commercial usage essential to cross-border trade, credit, and joint enterprise. All similar undertakings must be discounted against expropriation risk, rendering everyone in interdependent, developed economies poorer.

With sanctions against Russia the West undermines Western values of non-discriminatory rule of law, enforcement of contracts and credit terms, and respect for private property ownership, not to mention ancient diplomatic norms of statecraft and 5 decades of official reserves accumulation. Western markets and commerce will be re-rated accordingly by both domestic and foreign investors and creditors. Already surging energy, mineral, and agricultural prices in global markets show that the Western currencies are worth less, not more, as a result of sanctions when measured in what the world finds really useful. A barrel of oil today is USD 111 relative to 57 a year ago, and is likely to go higher. As someone said, "Investors want to buy anything central banks can't print."

I'll be writing a series on the Angell Paradox and Western sanctions, but today we start with dollar dominance and the seizure of central bank reserves. This keys off a Bloomberg interview with Zoltan Pozsar, Credit Suisse rates strategist and formerly head of the Open Market Desk at the Federal Reserve Bank of New York.

Pozsar holds the view that reserves can be divided into 'inside money' (FX and gold liabilities held with peers, banks or custodians) and 'outside money' (gold and hard reserves in your own custody). Russia holds all its gold, its largest reserve holding, domestically within its own vaults. Pozser suggests the US Treasury's Afghanistan and Russian freezes/expropriations are "good for gold". Russia's gold is indeed becoming more valuable as the world re-rates Western currencies and assets. Russia could re-anchor the rouble to gold to stabilise its currency. Russia can also mediate gold repos for Western currency liquidity through non-aligned agents, bypassing Western freezes on its accounts.

The West has fewer options as they are all debtor nations with large debts to Russia. Russia owes the West about USD 40 billion. The West owes Russia over USD 388 billion in cash and securities that are now frozen in peer central banks, commercial banks, and depositories. Who is the bigger defaulter if Russia, Russian banks, and Russian corporations cannot service their debts or make commercial payments because of the West's freeze? Is it Russia? Or is it the West itself which is impairing and/or repudiating Russian claims on money the West borrowed?

The US, UK and EU have long attracted investment with open capital markets and rule of law. Freezing and expropriating the central bank official reserves of Venezuela (USD 380 million in 2019 in US and USD 900 million gold reserves in 2020 in UK), Afghanistan (USD 7 billion in January 2022 in US), and Russia (USD 388 billion in frozen in February 2022 in UK, EU, US, Japan, Australia, Canada, etc.) sends a signal that official reserves held in the West must be re-rated as far more risky than previously supposed. If rule of law on international credit is replaced with debtor nation discretion on whether your particular claim is recognised, we are now in a very different and darker world. Pozsar observed, "In geometry two points make a straight line," referring to the Afghanistan expropriation and Russian freeze.

The Afghanistan expropriation shocked the world, as it appears vindictive, arbitrary and petty. Vindictive as the US was humiliated in its forced, rapid military withdrawal from Afghanistan in 2021 after a 20 year occupation that left the nation poorer and more vulnerable. Arbitrary as the US has never offered any evidence of Taliban complicity in the 9/11 attacks or Osama Bin Laden residence in Afghanistan in 2001 at the time of the attacks. The 9/11 attackers were 15 Saudis, 2 Emiratis, 1 Lebanese, and 1 Egyptian. When Bin Laden was killed he was living in Pakistan, a close US ally. Petty as the award of half the expropriated funds to 9/11 victims is pure domestic theatre. Even the editors of Bloomberg are urging restoration of the reserves.

China, holder of the world's largest official reserves, and another geo-strategic rival of the US, watches closely. China will want to reposition its official reserves to have less exposure to a freeze or expropriation aimed at destabilising its economy and global influence as tensions with the US escalate. When the Afghanistan reserves were unilaterally expropriated by the US, a Chinese diplomat protested in the UN. The criticism was reinforced by the Foreign Ministry in Beijing:

China and Russia are what Pozsar calls 'surplus agents'. Russia runs twin fiscal and trade surpluses, so generates a large amount of investable reserves. The West, by contrast, runs large fiscal and trade deficits. Both the US and EU sovereign debts exceeded 100 percent of GDP in 2021; the UK debt is at 94 percent of GDP. They need others to buy their debt, otherwise their central banks are forced to monetise government deficit spending. Japan has proven that ever greater monetisation is possible, but the world does not trade much in Yen so the risks are lower.

Sanctions force Russia, China, and other nations in the global economy to reassess whether doing business in dollars is worth the risk. De-dollarisation has gone quiet lately, but will now be a matter of intense investigation in all nations fearing future covert or overt US destabilisation within or at their borders.

Pozsar observed, "It's Us vs. Them, and lots of exporters will now see the US dollar and assets in the US at risk. . . Seizure of assets spurs diversification, and there are all sorts of reasons to do that now."

Pozsar's view was echoed yesterday in a Central Banking commentary by Joseph Wang: Rethinking sovereign risk - 'Risk-free' assets now include the possibility of complete confiscation with no recourse. Like Pozsar, Wang worked for the Open Market Trading Desk of the New York Fed.

Data from the International Monetary Fund shows global central banks on aggregate hold 75% of their reserves in the dollar or euro, with the balance in trace amounts of other currencies. Other currencies simply do not have a comparable global acceptance or payment infrastructure as the dollar and euro. But prudent risk management will compel diversification regardless, which will also facilitate the further development of other currency systems.

Less than 2 years ago I wrote China's Dollar Pragmatism (Most Read OMFIF Commentary 2020), suggesting US dollar hegemony was secure, even as China gained global trade and economic dominance. Today I would not say the same. As Pozsar noted, "Dominant currencies fade and die in wartime."

The US, UK and now the EU may have a taste for freezes and expropriations against their own creditors, but their debtor nations will not profit by it. Assets subject to expropriation are either not worth owning or worth much less. The assets devalue to all domestic and international investors, not just those the West chooses to destabilise this week.

The battle against inflation is President Biden's 'top priority' as stated Tuesday in his State of the Union Address. If dollars and dollar assets are no longer seen by official and private investors as safe to hold relative to gold, other traded commodities, and monetary alternatives less at risk of freezing/expropriation, the battle to tame inflation gets much, much more difficult.

Angell Paradox: You loot, you lose.

UPDATE on 25/03/2022: The Central Bank of the Russian Federation has announced that it will buy gold from Russian banks on 28/03 at a fixed price. This effectively fixes the price of the rouble in gold, at least within Russia.